How It Works: Vacuum Technology for Space Simulation Chambers 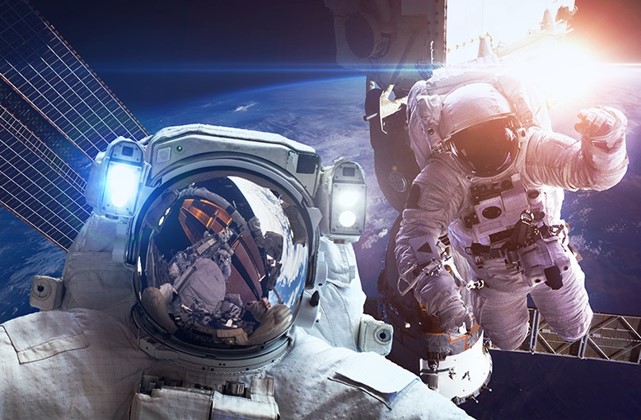 Once launched, the repair of a satellite becomes much more challenging. Therefore, testing a satellite in a vacuum prior to launch is critical.

Evacuating thermal vacuum chambers requires a two-stage process. First, operators pump out the air. Then, they pump out the gasses released from the walls and the test objects. Evacuation time can take a day or more depending on satellite size and design.

Satellites experience temperature extremes as they orbit. For this test, engineers need access to a high-vacuum (HV) pressure of at least 1 x 10-6 mbar or lower inside a thermal vacuum chamber.

Thermal vacuum chamber technology is quite powerful. Some thermal vacuum test chambers can even simulate solar wind. The volume of these specialized chambers is up to 10,000 m³.

As well as testing the satellite itself, each individual component is tested individually before integration into the system. This requires smaller test chambers of 1 to 100 m³ in volume.

Large oil diffusion pumps and helium-cooled panels were standard a few decades ago. Today, modern, oil-free vacuum systems are a must for thermal vacuum chamber testing. Refrigerator-cooled cryopumps are typical for the high vacuum levels for clean operation.

To keep or shift their orbits, satellites require frequent repositioning, most commonly via modern electrical propulsion. Ion thrusters accelerate ions (often of the heavy inert gas xenon), neutralize them, and thrust them out in a jet.

Ion thrusters allow for either a lighter payload or a longer operation time. 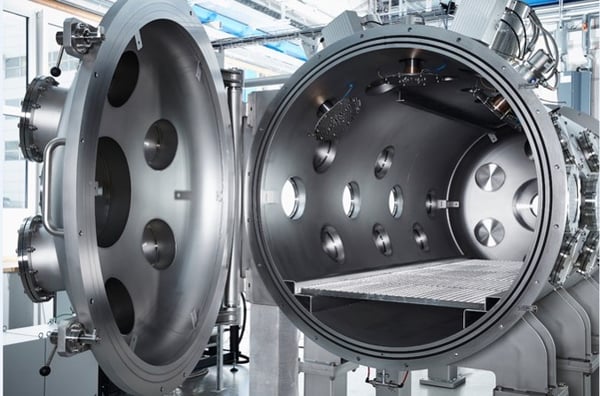 The large capacity and streamlined design of cryo-pumped chambers help drive down overall costs and allow for long-term stability testing.

Ion thrusters must be tested for long periods in a vacuum chamber under space conditions, including the presence of the xenon gas the satellite will emit. To achieve gas flow at pressures of 10 x 10-5 mbar or below, the chamber must support pumping speeds of between 10,000 l/s to several 100,000 l/s.

Xenon is not easy to pump — its poor heat conductance can overheat turbomolecular pumps (TMPs) during compression. Also, its substantial molecular weight causes poor baffle and valve conductance, which can reduce the pumping speed of cryopumps and diffusion pumps by more than 50 percent.

To achieve the tremendous pumping speed needed for  space simulation in the presence of xenon, cold panels are added to the chamber. The panels are cooled to temperatures below 50K by single stage cryocoolers. Xenon gas is condensed directly on the panels inside the vacuum chamber.

The potential for extended, comprehensive stability testing is clear. A small cryo panel of 600mm in diameter has a pumping speed of 16,000 l/s inside the chamber with zero conductance losses as it is directly exposed in the chamber. This figure increases exponentially with each additional pump panel.

Without the capability to simulate space conditions prior to launch, space flights would not be possible as an understanding of in-space behavior requires some testing in that environment. Space simulation is a critical application of advanced vacuum technology.

How it Works: Cryopump Technology

Working under HV & UHV? Here's what you need to know...